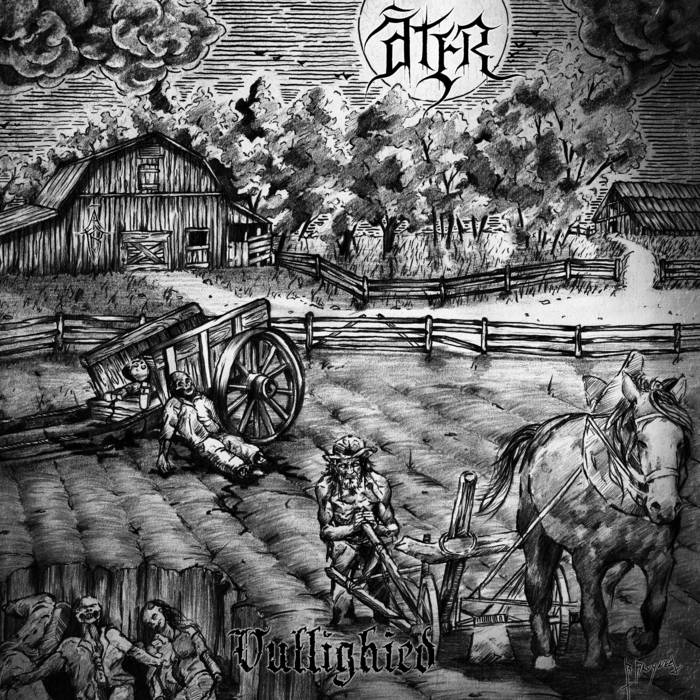 Āter started in 1996 as a solo project. It didn't do much because the artist, Wesley Beernaert, often had the opurtunity to join touring artists as lead vocalist.

Somewhere in 2004 it seemed as if Āter was going to turn into a band, in reality it only left Wesley Beernaert with sesion guitarist Mantorok. They both finished the ep + Wesley wrote some 12 extra songs.... Then the worst happed, a flood... All pc's were broken.

Years later while moving Wesley found an old hard drive, broken, and recovered 4 songs, remastered them and replayed the bass and some guitar parts. And there you go. The EP "Vullighied", written in an almost 1000 year old dialect of Flanders. A bonus song was added to the end. The ep was released on most digital platforms (see link below) but the physical version, which will be printed on demand, has an extra intro and song and included different variations of custum picks, stickers and patches ad a bonus. Artwork for this cd is included in the purschase, booklet recto and verso, cd back inlay and cd press so you can print and press your own cd if you want.

Meanwhile Āter is no longer a solo project. Wesley has had the incredible luck to have had been approached by people way more capable than himself to write songs and record them. This EP has been released because history should not be lost, and it interludes the new Era of Āter as a new band. Expect similar music but with an emphasis on melody x 100, 2 guitars instead of one, and goosebump inducing-melodic riffs.

Link to listen to samples and buy the album + info on which platforms "Vullighied" is available here on bandcamp of course and through different online platforms like Itunes, Apple Music, Spotify, deezer, amazon, … loads of others. Direct link to spotify, iTunes and apple music here:

The EP is considered a solo project of Wesley Beernaert in deep collaboration with Mantorok as a session guitarist.

Mantorok worked with Wesley as a session guitar member and wrote most of the riffs while I filled in and did the lyrical concept. It’s completely sung in a almost 1300 year old ancient flemmish dialect that still exists to this day, but is endangered. Therefore it is very hard to accurately translate without loosing the beauty of the words, but it deals with the abuse of the elite against the common folk and but beneath you will find a briefly explanation of the lyrical concept of each song.

First song " 'd Oere" is about the whore who doesn’t want to be a whore but does what she has to do so she can feed her children, dispite being “willingly raped” every evening by countless men and therefore has to deal with festering wounds constantly due to the brutality she has to endure.

The second song, "De strontroaper van Abjille", is about the “noble” job of cleaning shit from the street, a job many people make fun of, but is in fact the nobelest and least selfcentered job anyone could do, smelling horrible all day, working in filth, to make sure YOUR shoes are clean when you’re walking home from your comfortable job.

It then proceeds with the conflict between the French Belgian and Flemmish Belgian regions in "Oes vorvoadern vochten, and ends with a song about in the end they all cellebrate “Valkennacht” (also the song's title) as brothers and sisters.

I also added a bonussong which was very experimental and completely different to the old school black metal that would describe the previous 4 mentioned songs, this one is more of a blackened death horror type song with hysterical vocals. I added it to add value and variation and because I love this song deeply since it took some time to create. It was written by the brothers Zoran and Baruch Van Bellegem and lyrics by Gratiën Versijpt, though performed by me.

Somewhere in 2004 Wesley teamed up with Mantorok. They both finished the ep + Wesley wrote some 12 extra songs. Then the worst happed, a flood. All pc's were broken.

Wesley recoverd 4 songs, remastered them and replayed the bass and some guitars. This became EP "Vullighied", written in an ancient old dialect. A bonus song was added with a different vibe. ... more

Bandcamp Daily  your guide to the world of Bandcamp